A Robber Fly at last (& one spider shot at the end)

Autumn has seen a lot of Robber Flies at our place. I love getting photos of these amazing looking animals – they certainly look like they come from the realms of science fiction. So far I’ve had little luck getting shots of them as they have been very restless. In the cool of a recent afternoon, I was pleased to find one perched very sedately on a Cassinia bush. 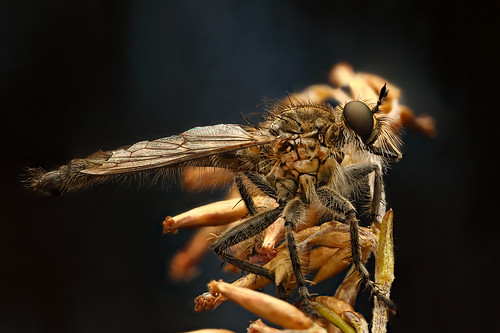 Perhaps it was the cool conditions slowing it down, but I was able to get some good close up shots. They are called Robber Flies as they grab their prey in their strong claws and whisk them off somewhere safe for a feed 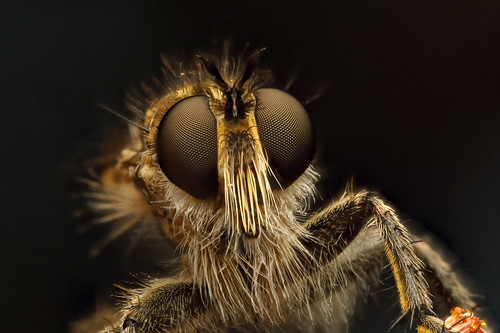 There are also a few small Leaf Beetles of various types about at the moment and they are heavily favouring Golden Wattles (Acacia pycnantha) and especially their developing flower buds. 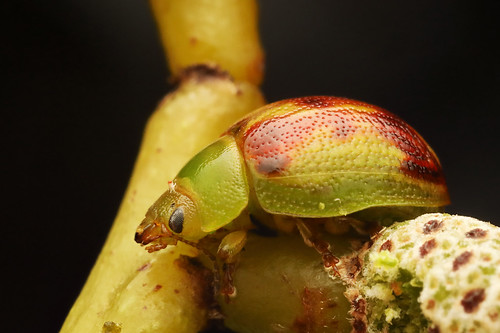 Nocturnal excursions into our bush have also yielded a few finds. One was a small wasp, about 10 mm long snoozing on a native Clematis in our yard. 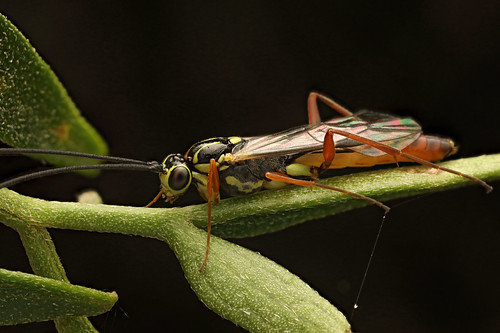 And here is the spider warning for the arachnophobes!

Most of the Huntsman spiders that we encounter tend to be fairly large specimens and quite impressive. However, when I’m snooping around the bush at night, I often encounter quite small ones that I assume are young examples of the larger varieties, as they look so similar. These small spiders are usually hiding on a leaf of some type. Although the one I’m presenting here looks very imposing, it was only about 20 mm across. 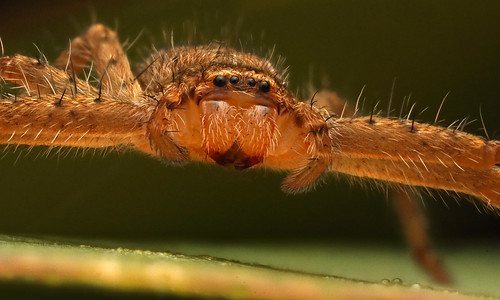 Posted in Bees and wasps, Beetles, Identify it, Spiders

A bright spot and a puzzle

Update: Suggestions for the mystery feather include … Square-tailed Kite, Wedge-tailed Eagle, Southern Boobook, Powerful Owl and Tawny Frogmouth. Nothing definitive as yet but will keep you posted.

Late yesterday I ventured to a favourite spot on river – an area I call ‘The Reserve’, where the Muckleford Creek meets the Loddon River.

Newstead Landcare has been doing a great job of restoration in this area, planting a variety of local small trees, shrubs and grasses. These plantings are doing well in their own right, as well as suppressing weeds such as blackberry. A Eastern Yellow Robin perching in a Silver Wattle in dappled sunlight was the highlight of the day.

Now to the puzzle.

I found this feather the day before near Bruce’s track. It has me baffled, apart from some confidence that it belongs to a raptor. The dimensions are 140mm from the tip to the base of the shaft and 75mm wide. It feels as though it’s too wide to belong to a diurnal raptor, but I’d be interested in readers thoughts.

A wagtail at the water

On most visits to the ‘pool’ at the Rise and Shine a Willie Wagtail will turn up at some stage to drink and bathe.

Largely unconcerned by my intrusion each visit is enjoyed, by myself and the wagtail!

Willie Wagtails are in the same genus, Rhipidura, as the fantails, but are a significantly larger bird. Grey Fantails weigh between 7 and 10 grams, while Willie Wagtails come in around 20 grams on average.

A follow up to yesterday’s less than definitive post regarding a ‘mystery’ honeyeater. The considered opinion of a number of experts is that it was most likely a Fuscous Honeyeater, not a Yellow-plumed Honeyeater (which does appear in small numbers locally at this time of year). A ‘true’ Fuscous Honeyeater is pictured below, a non-breeding adult that arrived to drink just after the Willie Wagtail departed.

This gorgeous, tiny bat was discovered yesterday amongst some stacked timbers.

I’ve no real idea of what species it is – any suggestions gratefully considered!

After a few quick images it was placed gently behind a flap of bark on one of the Yellow Gums in the backyard.

Posted in Help please, Identify it, Mammals, The Home Garden

Sometimes in my native nursery at Newstead the plants provide habitat before they even leave the greenhouse! This morning I found a 4cm long, smooth frog. Looking in Chris Tzaros’ ‘Wildlife of the Box-Ironbark Country’ I think it is Southern Brown Tree Frog, but am happy to be corrected.  The inner thighs are orangey in colour and eyes have slits not a crosses. I am more certain of the plant id: Montia australasica (White Purslane).

Posted in Frogs, Identify it

Discovered these egg shells out in the paddock this week. Small, thin and fragile, apparently dug out of a shallow hole, eaten and the shells left behind. Whose eggs and who is the culprit?

A cluster of eggshells

A shallow hole nearby

A dark scat and a white shell – related?

Posted in Fauna other than birds, Identify it, Reptiles

Suspended in a Golden Wattle

#1 is the beginnings of a Mistletorbird nest

#2 is the partially built nest of a Grey Fantail

Stay tuned for updates on progress.

Posted in Identify it

Spotted yesterday in the garden – a cool season migrant from the hills.

A small prize for the first correct answer.

I’m going to award two prizes, first to Alison Rowe for proposing a Golden Whistler and secondly to Anne Brophy for suggesting it was a juvenile. Thanks to you all for the interest in this post and for the great suggestions regarding the bird’s identity.

Posted in Bird observations, Identify it, The Home Garden

In the heathy dry

Rain – what a nice surprise!

With 14mm over the past few days doing little but settling the dust I was interested to see if there had been any impact in the bush. This spot along Demo Track has an excellent stand of Heathy Dry Forest – it’s a terrific spring wildflower location.

Alas, no orchids, but the mosses and lichens have benefited from some moisture.

Ditto … clearly not my strong suit!

I was surprised by the number of Golden Orb-weavers Nephila edulis – they were the only real sign of animal life.

Golden Orb-weaver with a collection of prey.

Posted in Identify it, Mosses and lichens, Spiders

One of the best!

Correct – it’s a White-winged Chough nest, one of the best I’ve ever seen.

Remarkably it’s in perfect condition, despite falling from its support, a eucalypt bough in the canopy. Choughs return to old nests, adding extra rims of mud over time – this one appears to have been refurbished at least twice. The inside of the nest has been lined with grass and finely shredded bark, to produce a cosy bowl for a new family. The fresh appearance suggests its fell before the eggs were laid, or at least early in the incubation phase.

The deep bowl was beautifully lined with strands of native grass and shredded eucalypt bark.

The shape of the eucalypt bough is preserved in the base of the nest.

Expertly built with mud, stone and fibre – tried and true technique over millennia.

The nest, found by Elliott Pearson of Campbelltown, was thoughtfully donated to the Newstead Primary School in 2014.

Posted in Bird observations, Identify it