Gold is the colour …

Gold is the colour of the bush at present – wattles, honeyeaters and robins are the embodiment of a wonderful spring.

Eastern Yellow Robins continue to delight … the final image in this sequence is a first for me. 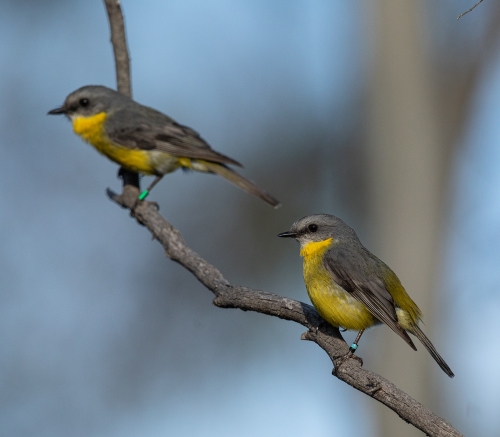 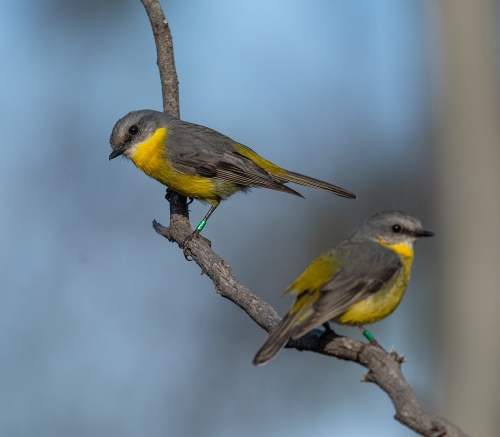 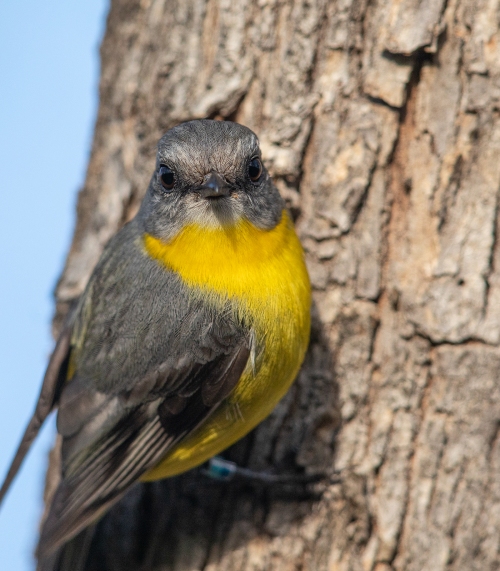 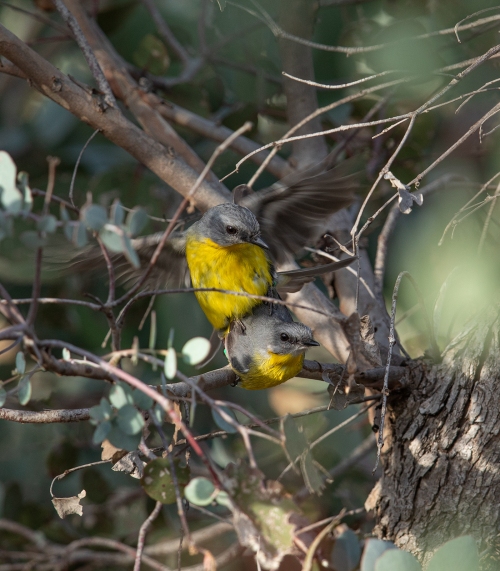 In the engine room

The local bush hasn’t looked as good for years … of course memory does play tricks, but it’s a cracker of a spring.

Healthy shrubby understorey is a key driver of bird populations and there has been a steady recovery in some areas of the Muckleford bush since the Millennium drought broke in 2010. Rough Wattle Acacia aspera is one of the plants priming this resurgence. In full flower it’s home to a myriad of insects and this of course brings the insectivorous birds to feast and breed.

Hooded Robins are competing at present with a host of other woodland birds for their share. The Eastern Yellow Robin (pictured below) was chasing the Hooded Robin pair in a minor territorial dispute, before all resumed regular duties. 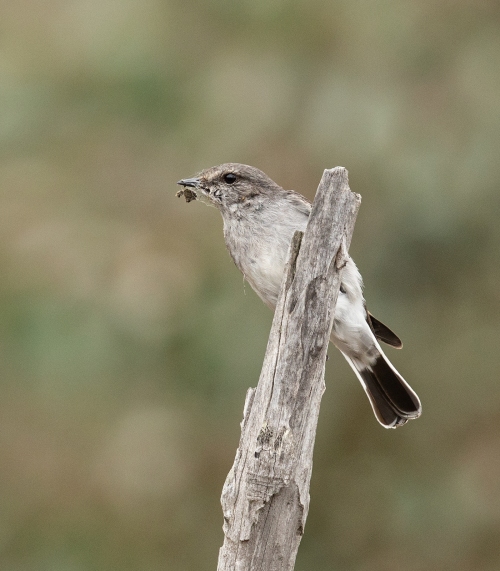 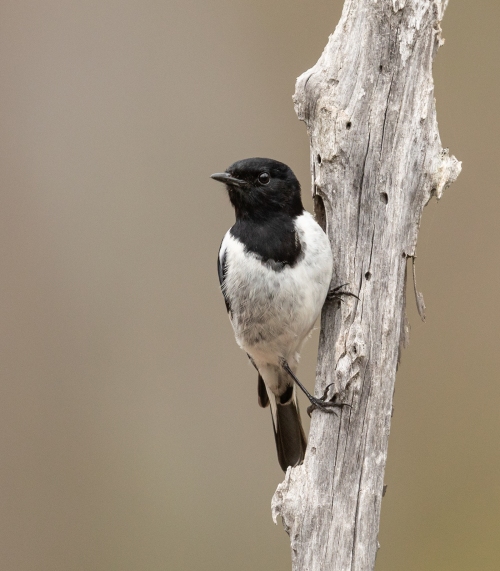 Eastern Yellow Robin … on the lookout

Perhaps a smidgeon earlier than usual, White-winged Trillers have arrived back from their northern vacation.

First hearing their distant rattling calls, two individuals were then spotted right in front of me near Mia Mia Track. The pied bird is a sub-adult male, retaining vestiges of the brown immature plumage. The other is an immature female, the pale barring on the flanks a distinctive feature. Trillers belong in the cuckoo-shrike family Campephagidae – the White-winged Triller is scientifically known as Lalage tricolor (formerly sueurii). Trillers, like cuckoo-shrikes, have a penchant for caterpillars.

The origin of Lalage is vague, deriving apparently from a reference to an unidentified bird, by the Greek grammarian Hesyschius. The epithet sueurii, now replaced by tricolor, was named for Charles Lesueur (1778-1846), a French draughtsman and zoologist who was part of the Baudin expedition to the South Seas in the Geographe from 1800-1804. 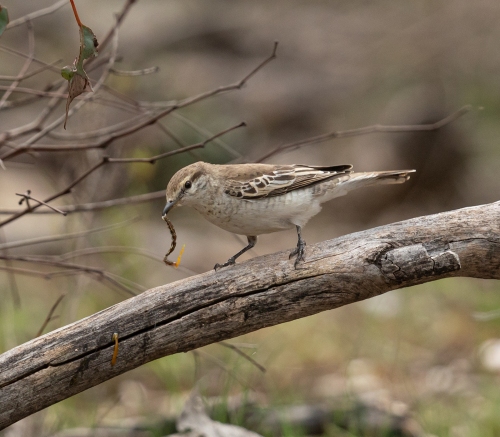 I’ve been visiting a hotspot on Mia Mia Track this week.

Hooded and Eastern Yellow Robins, along with Rufous and Golden Whistlers were conspicuous and active during each visit, as were a party of Varied Sittellas.

The sittellas, seen foraging in the late afternoon sunshine on Thursday, were then spotted gathering nesting materials yesterday. The nest, almost complete, is high-up in the fork of a dead sapling – perhaps 1o metes above the ground.

A sittella nest is a thing of beauty. The delicate cup features vertically arranged shreds of bark, bound together with cobwebs, including a few threads that have been used to anchor the structure. The final touches include spider egg sacs that are arranged around the rim. 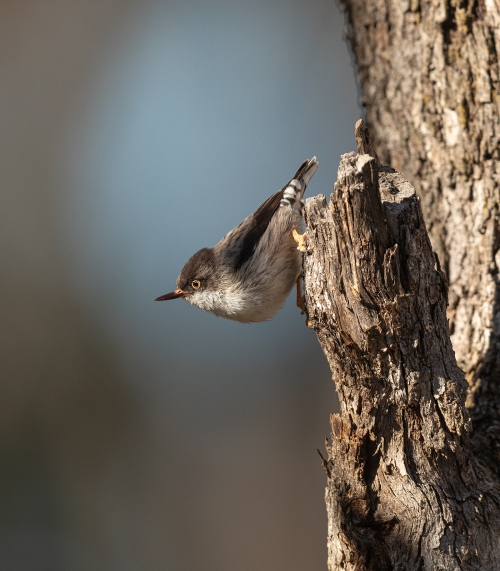 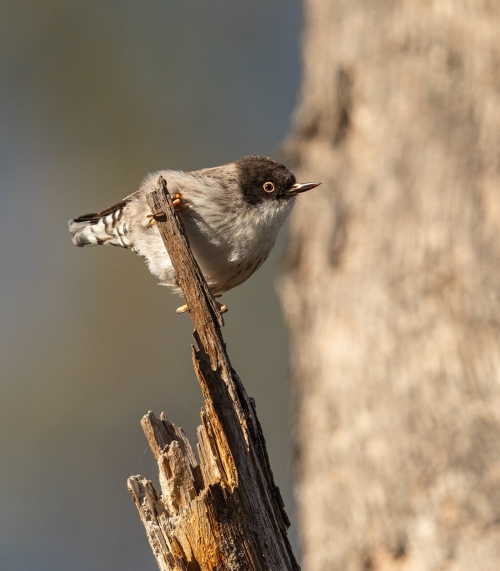 Still foraging in the same spot, a day later. 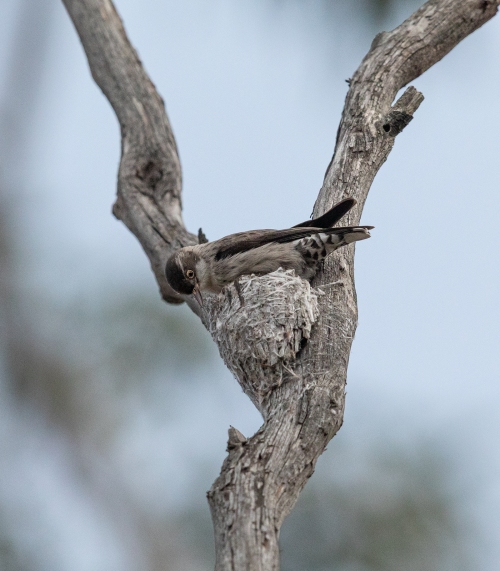 What a delight to be able to photograph a Rose Robin in the local bush …especially a spectacular male.

Rose Robins are regular migrants to the box-ironbark country, arriving in small numbers from late autumn and departing for their breeding grounds in the tall, wet forests to our south by late winter. They are not at all common locally – over the years I’ve only seen a handful. This male was found in a damp gully with Yellow Box and flowering Golden Wattle to the north of Bell’s Lane Track. As I observed the bird the calls of Flame Robins (also heading south), Scarlet Robins and even a Red-capped Robin provided the accompanying soundscape. 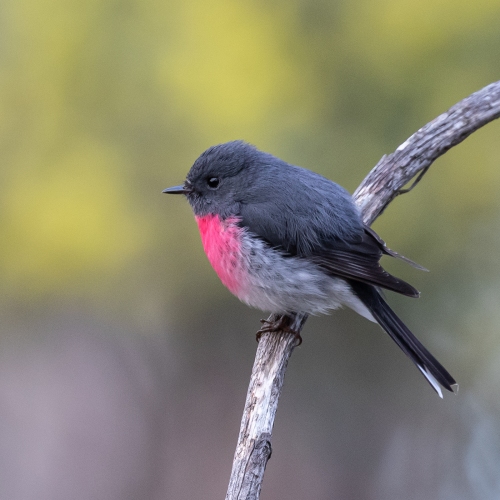 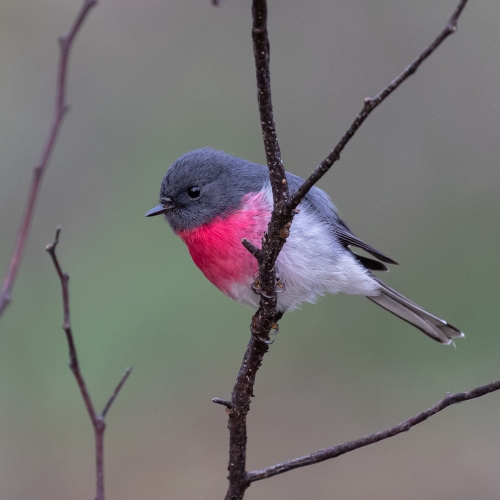 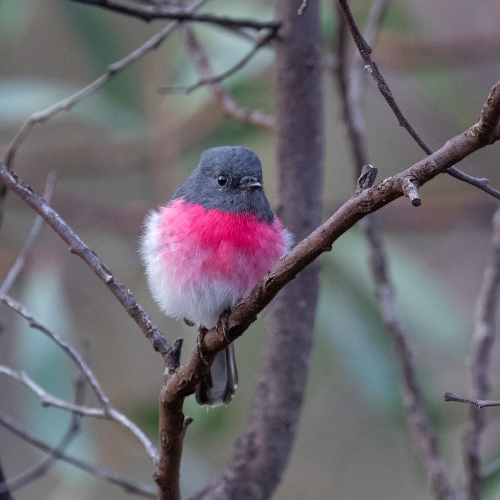 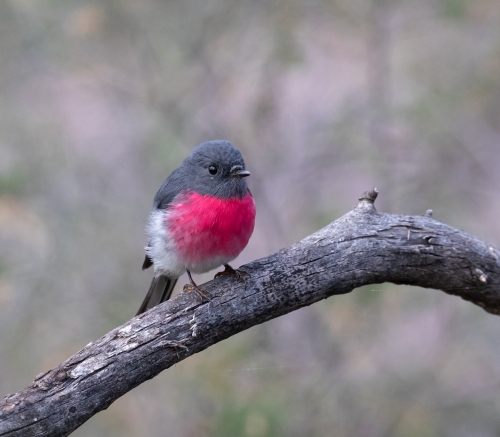 Many thanks to Nevil Amos for the tip-off.

Galahs in the Mia Mia

It is not unusual at this time of year to observe a Galah in flight carrying a spray of eucalypt foliage. The birds, both male and female, use the foliage as nest-lining. This pair is one of a number that have commenced nesting in the Mia Mia. They are particularly fond of alluvial drainage lines with a selection of veteran trees from which to choose a suitable hollow. 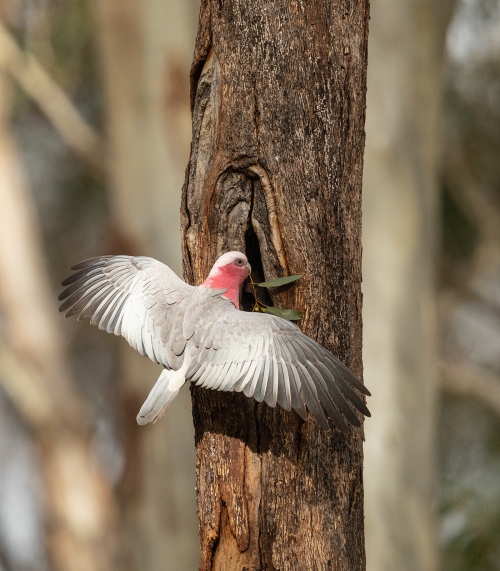 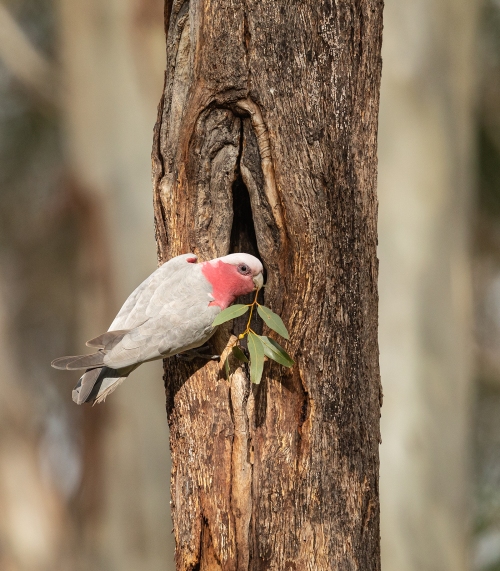 As I wandered along a side-track in the Mia Mia at the weekend the unmistakable sound of Olive-backed Orioles  could be heard coming from a couple of different directions. A common spring migrant, this is something of an early record as they generally arrive in the first week of September. As I tried to track down the birds calling in the trees nearby I spotted this individual ‘skulking’ in the undergrowth. This one was uttering a selection of different notes, softer and including some mimicry for which orioles are renowned.

Orioles are considered by some to have few equals as a mimic – the breadth of their repertoire is impressive … Whistling Kite, Crimson Rosella, Noisy Friarbird and Grey Shrike-thrush to name just a few of the species that have been noted being impersonated by this oriole. One of the theories put forward to explain their mimicry is that it allows them to feed in mixed flocks with more aggressive birds, such as large honeyeaters and figbirds. 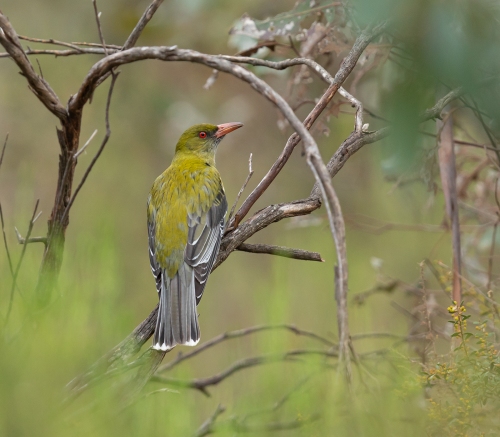 Moments later another early arrival appeared quietly overhead, just above the canopy – a Square-tailed Kite back in one of its favourite haunts. Spring is in the offing! 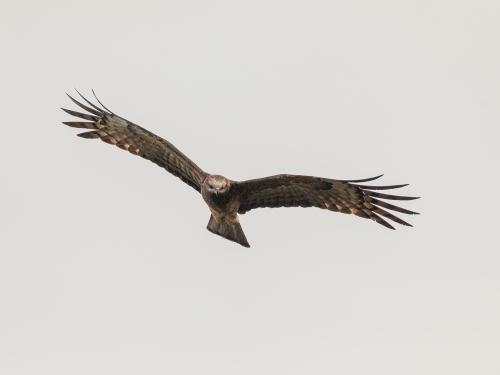 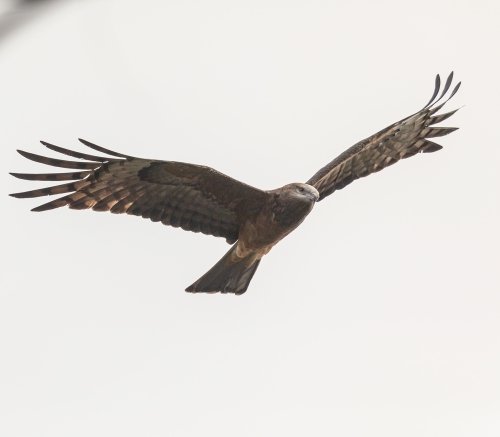 In the trees and on the ground

Treecreepers, of which we have two local species, are aptly named. They do indeed ‘creep’ along the trunk and branches of trees, generally eucalypts, in search of insects. Unlike the (almost) strictly arboreal White-throated Treecreeper, Brown Treecreepers spend considerable time foraging on the ground. At the weekend I enjoyed watching this Brown Treecreeper searching for insects amongst the dew-laden moss-beds as some of its ‘colleagues’ behaved in more typical treecreeper fashion nearby. 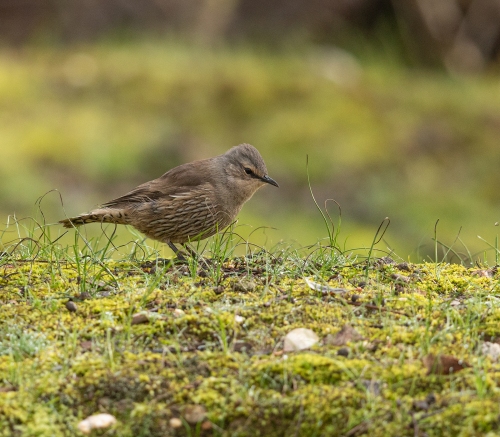 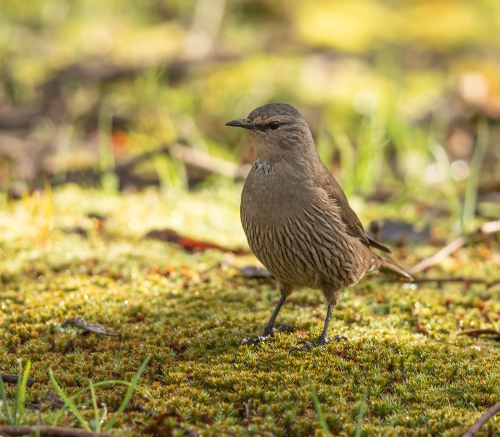 Posted in Bird observations, Spring Hill and the Mia Mia

It was nice to see one of our rarer local parrots during a visit to the Mia Mia during the week – a pair of Purple-crowned Lorikeets inspecting a Yellow Gum for potential nesting hollows in the late afternoon sun.

Fingers crossed for some soaking rain over coming days. The wet start to winter has been followed by a prolonged dry spell. 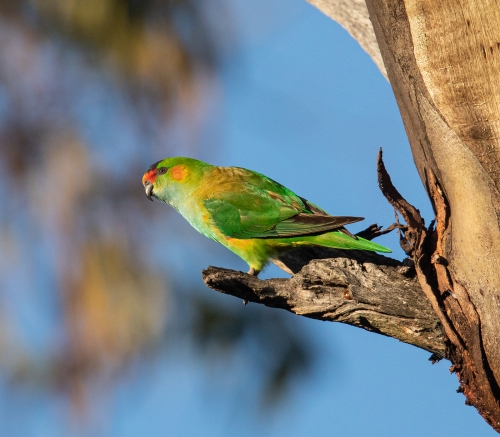 Yellow-tufted Honeyeaters are into the swing of breeding again.

This species typically nests at low levels in shrubs, or as in this case, a coppicing eucalypt. They make beautifully woven nests from grass and cobwebs, sometimes incorporating wool into the suspended basket. 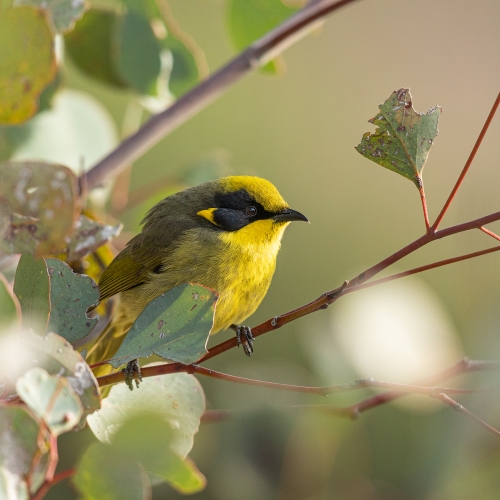 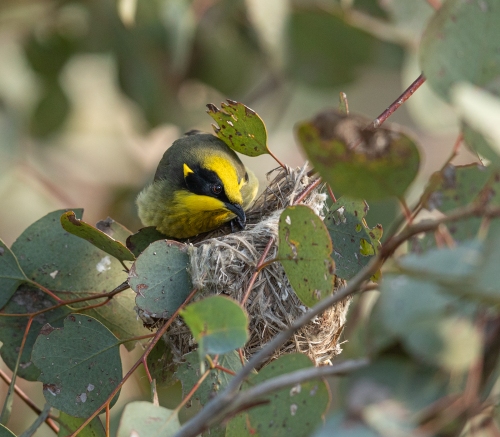 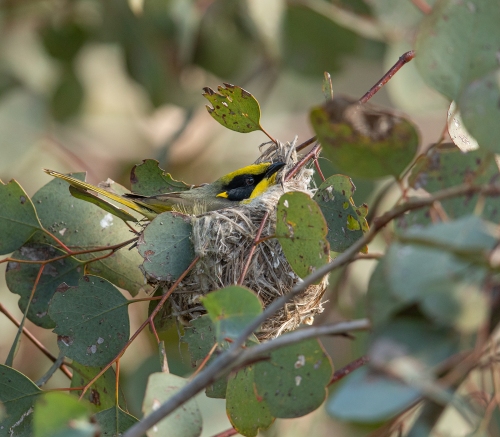