I couldn’t resist the opportunity to share another Black Falcon Falco subniger image, this time in monochrome. It appears there are at least two separate pairs roaming the Moolort Plains at present.

Venturing outside the bubble

I’ve taken some geographic licence and bent the 20 kilometre rule a smidgeon with today’s post.

The headwaters of the Loddon River are on the Great Divide, south of Daylesford. Much of the landscape in this area was formed in the last 6-7 million years, the result of volcanic activity that is evident across much of south-west Victoria. Just north of the village of Glenlyon the Loddon River drops into a spectacular gorge, with a series of small cascades, including the Loddon Falls. Protected as a Natural Features Reserve, the area contains veteran Manna Gums and Candlebarks that provide a magnificent contrast with the tall basalt columns of the gorge. Fractures along the columns provide an anchor point for native plants including Tree Violet and Austral Stork’s-bill (the native geranium). The local Glenlyon and Upper Loddon Landcare Group has been responsible for weed control and judicious planting in the reserve over many years.

Click on the images below to enjoy them in full-size.

A close up of the columnar basalt

The art of self-promotion

Male Superb Fairy-wrens are masters of it.

They are renowned for displaying yellow petals to the females during courtship, but will also perform this display outside the breeding season.

This male was observed yesterday morning in our garden. The combination of blue and gold is a great sight as we move into winter … a reminder that spring is not far away.

Thanks to readers who responded with local observations of Eastern Spinebills. I first heard their piping calls yesterday morning and then caught a glimpse of this adult female as it darted about.

In their usual haunts

I venture to the western boundary of the Moolort Plains only rarely.

At this time of year I make a note to stop by the recreation area at Tullaroop Reservoir. Planted out with specimen trees in the 1960s, mainly native but non-local, it is a good spot to get close up views of lorikeets as they feed on the autumn flowering gums.

Purple-crowned Lorikeets, an uncommon species locally, can be reliably seen here over winter, along with Musk Lorikeets. An immature White-bellied Sea-Eagle was also observed cruising the margins of the lake and then a pair of Black Falcons in the deepening gloom at Rodborough as I returned home.

Something a little different today.

Photographic images of birds are the daily fare on Natural Newstead. Other folks, of course, see our local birds, from tiny Superb Fairy-wrens to soaring Wedge-tailed Eagles, through different eyes.

The wonderful painting shown below is the work of well-known local artist Julie Patey. It is part of a terrific  initiative by the Newstead Arts Hub to showcase the work of local artists online during the Covid-19 lockdown.

I’d encourage readers to visit the online Artists Market to view their beautiful work – much of what is ‘on show’ has been inspired by and celebrates the landscapes and natural beauty of the Newstead area and central Victoria.

What a great autumn we are having … a sunny weekend, followed by 12.5 mm of rain overnight.

I’m hoping our landscape is starting to bounce back after torrid summer.

The home garden has been relatively quiet in recent times – still no Eastern Spinebills (regular autumn visitors), but we have had Brown, Yellow and Striated Thornbills, along with both Golden and Rufous Whistler. Yellow-faced Honeyeaters are about also – heard but not seen.

From the cold, damp earth of our bush, strange predators are rising from the depths and are already claiming victims. Predators that are not mammals, not birds, not reptiles, insects or spiders. Not even animals. It is the time for Scented Sundews (Drosera whittakeri) to start setting their traps. Through summer, they have survived as tubers in the soil, letting their leaves whither. Now with the warm and cool, they are putting forth new leaves, coated with sticky pins to attract and snare the unwary. 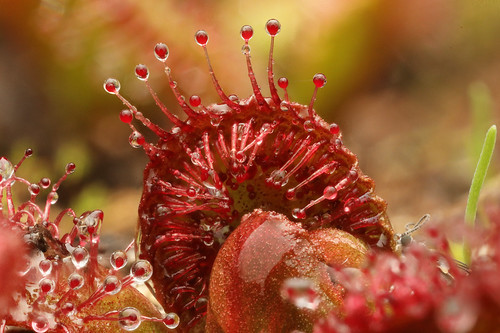 As their leaves unfurl, Scented Sundews look like something from Doctor Who. Note the prey already caught.

It never ceases to amaze me how quickly they catch the little flies common at the moment. Barely have the leaves unrolled before their are insects trapped, about to be digested by the sticky fluid to provide nitrogen for the plant. 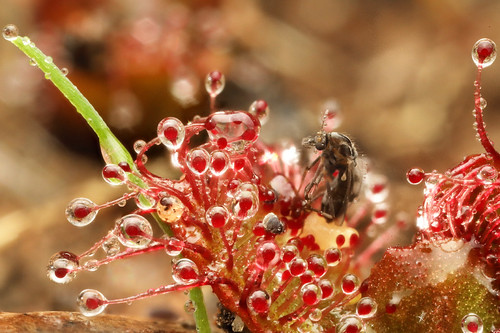 More victims for the Sundews

Also enjoying the late autumn have been quite a few small leaf beetles. I’ve found them almost exclusively on Golden Wattles (Acacia pycnantha) and very much around the flower buds, which I think they are eating. This shot shows a chunk taken out of the bud. 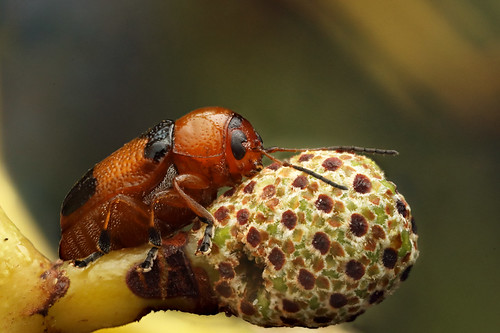 Some of these look very sweet face-on. 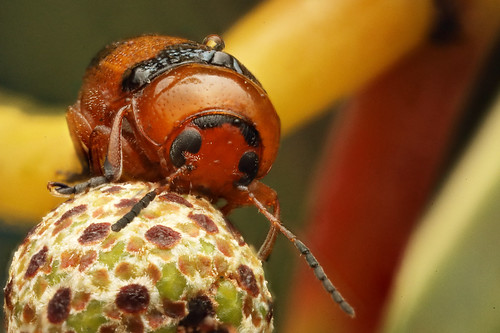 And from the front.

A lot of these tiny beetles, less than 6 mm long, are also mating, which seems a curious thing before winter. I assume that their eggs get tucked away safely ready to emerge as larvae in the spring. 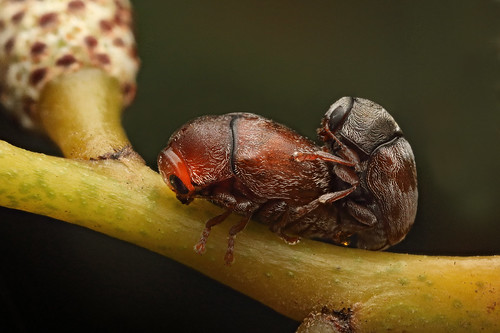 Preparing the next generation.

There have also been a few napping wasps around and I was pleased to find this sleeping insect on a Cassinia bush. It was so deeply asleep I though it was dead, but it did move its wings very slowly. 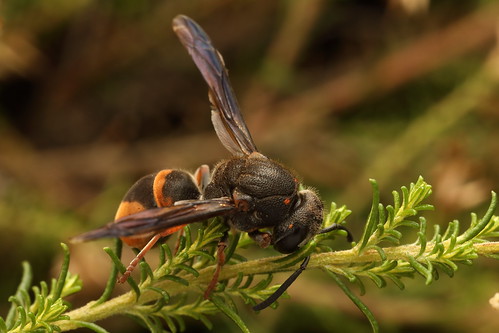 I’ve met these before and the good folk at bowerbird.org.au informed me that they aren’t wasps, but Wasp Mimic Bees (Hyleoides genus). One way to keep predators at bay! 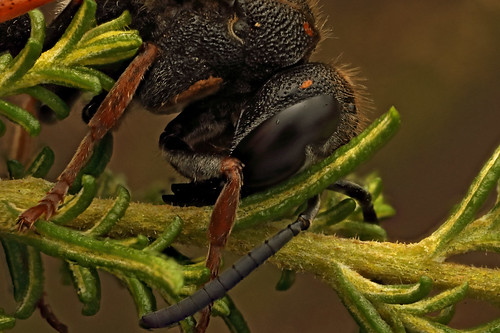 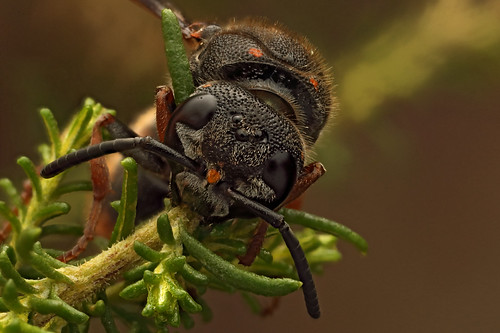 And from the front