After nary a Scarlet Robin all through summer the species has been following me around on the past few visits to the Mia Mia.

This lovely pair were sharing a new territory with a pair of Red-capped Robins … a nice combination.

The Collared Sparrowhawk arrived on the scene, pursuing a honeyeater before perching for a few minutes in a nearby Grey Box. The square-tailed silhouette of the raptor in flight confirmed the identity. 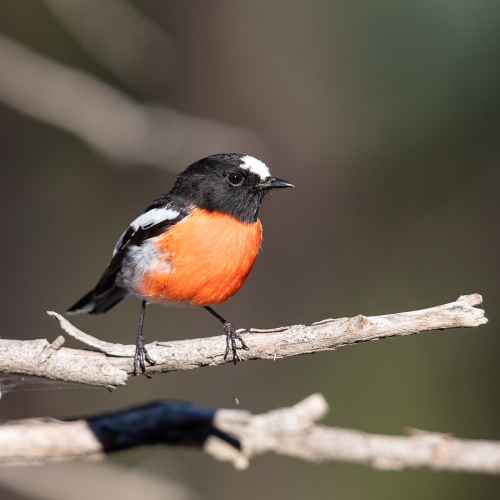 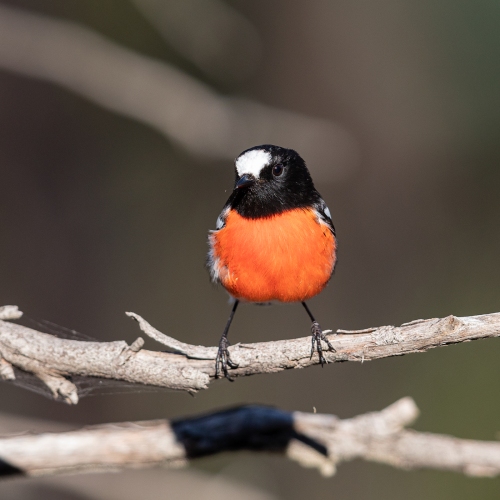 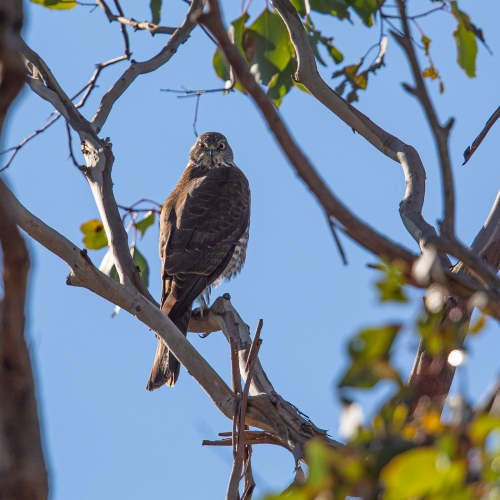 In days long past this observation would have been commonplace, a Wedge-tailed Eagle perched atop a Buloke.

Both are iconic species, but sadly, such a sight is a rarity in these present times.

The Buloke is emblematic of the plains country, easily taken, slow to return.

Bunjil, the Wedge-tailed Eagle, is of special significance to Indigenous Australians, especially the Dja Dja Wurrung People of central Victoria. 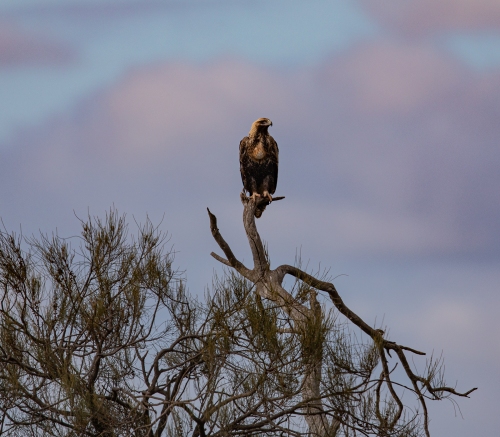 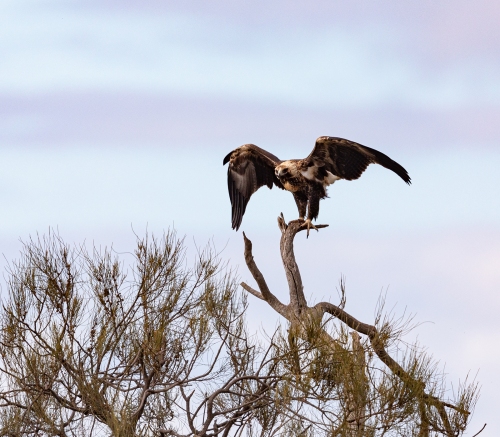 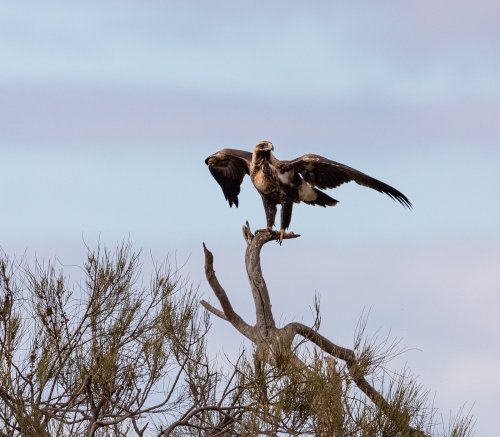 * The Recognition Statement signed at Yepenya on 15 November 2013, recognised the Dja Dja Wurrung as the Traditional Owners of Central Victoria.

Over the past week I’ve heard Fan-tailed Cuckoo, Sacred Kingfisher and Rainbow Bee-eater, all three are spring migrants about to head north, as well as Pied Currawongs, autumn migrants, arriving from the hills in good numbers. A single Swift Parrot was also spotted departing the backyard Yellow Gums, chased by a Red Wattlebird. ‘Swifties’ are back from Tasmania and I’m hoping to have a good look for them over the weekend in the Muckleford bush.

Last evening on a drive across the plains I came across a pair of Blue-winged Parrots, feeding on seeding grasses. This species is always a delight to encounter. It arrives in small flocks during autumn, after breeding further south, either in Tasmania or coastal forests in Victoria. More commonly seen on the plains country it also can be found in box-ironbark forests and woodlands.

Earlier I’d come across a young Wedge-tailed Eagle, standing aside a road-killed Red Fox. Quite a sight as it departed with ravens in pursuit. 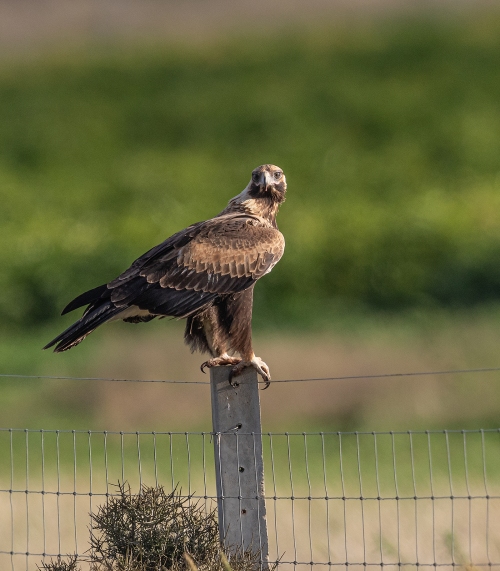 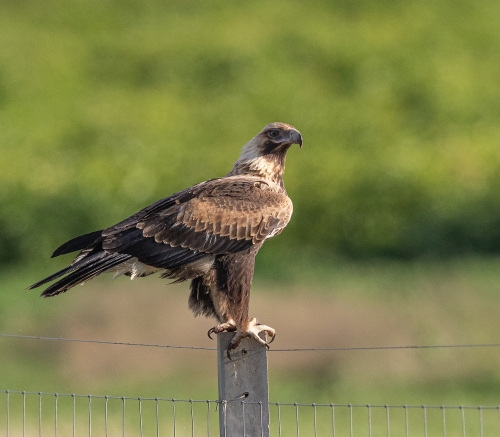 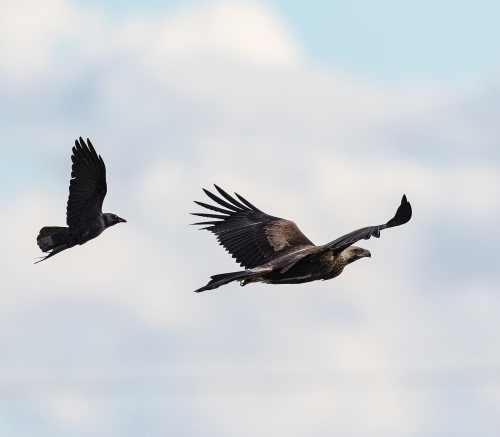 III … pursued by a Little Raven

Two out of three … drat!

This post records a pretty spectacular incident that I witnessed earlier in the week.

Approaching one of my favourite spots, a small bush dam along South German Track, a flurry action unfolded directly above me.

Three different birds were involved, sadly I only scored 2 out of 3!

I spotted the largest bird first, a White-necked Heron, looking decidedly nervous. Directly above the heron, perhaps at a distance of about 50 metres, was a Peregrine Falcon, readying itself to dive.

Of course I missed the shot … perhaps distracted by the appearance of a Square-tailed Kite which entered at stage left, at pretty much the same height as the heron. The kite, like the falcon, also seemed interested in the heron. While a Square-tailed Kite might happily take a nestling heron, a flying adult would be well outside its usual prey range. A Peregrine on the other hand will happily take large birds such as herons, ibis and the like, even when they exceed the body weight of the falcon.

As I was lining up on the falcon it veered away, disappearing in seconds via rapid level flight to the north. In the meantime the heron soared upwards in a series of tight circles, while the kite slowly meandered just above the canopy until I lost sight of it after a minute or so.

The entire ‘performance’ lasted for no more than 90 seconds … the image of the stooping falcon remains, for now, only in my mind’s eye. 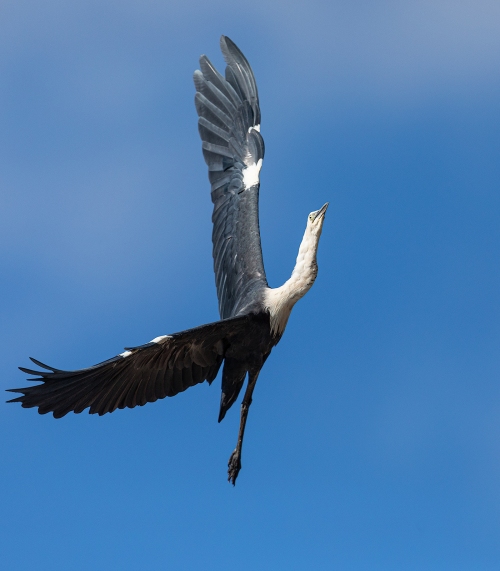 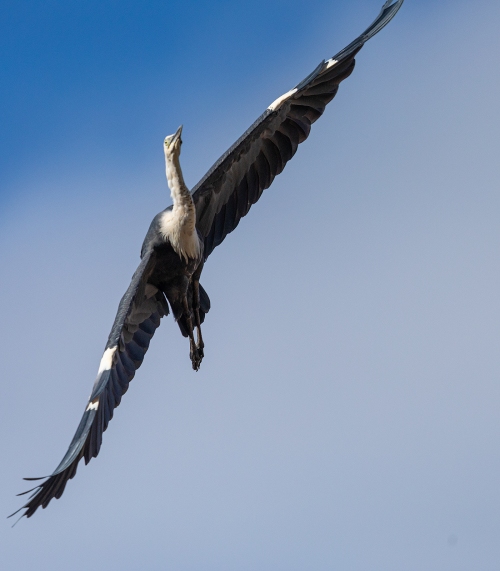 … this pale smudge is a Grey Goshawk (white morph), an exciting observation for Newstead.

Earlier this morning I glanced up from the garden and spotted a white shape, soaring in tight circles, pursued by two ravens. It took a moment to register that this wasn’t a corella or cockatoo … then I raced back inside for the camera. By this time the bird was rapidly becoming a speck as it drifted north towards Welshmans Reef.

The images below are no better than record shots, but the identification is 100% certain.

Grey Goshawks are rarely observed away from their stronghold, the wetter coastal forests in areas such as the Otways. There have been a number of local records over the years, with three observations in the Mia Mia (1/12/1999, 1/1/2000 and 1/4/2002). For me though this is a local first.

The Grey Goshawk comes in two distinct colour morphs, grey or white, with the white morph more common in southern Australia. In Tasmania, where the species is relatively common, all birds are white morphs. 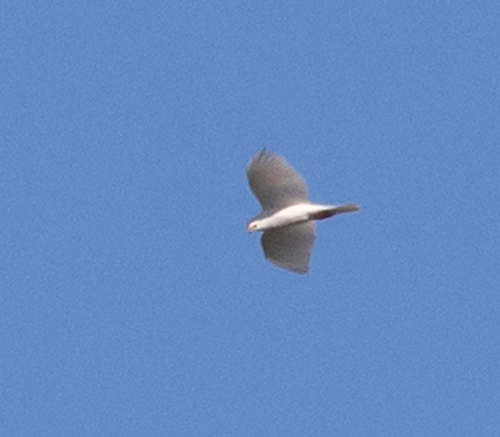 It takes something special to be distracted from a Rainbow Bee-eater … something like a Wedge-tailed Eagle arriving at tree-top height and almost within touching distance! 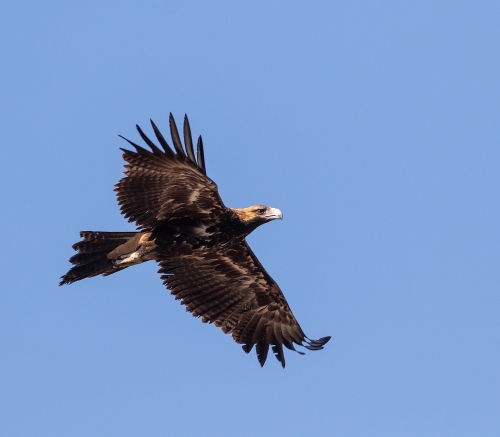 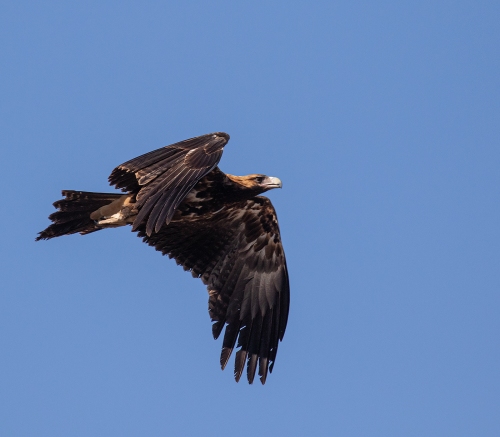 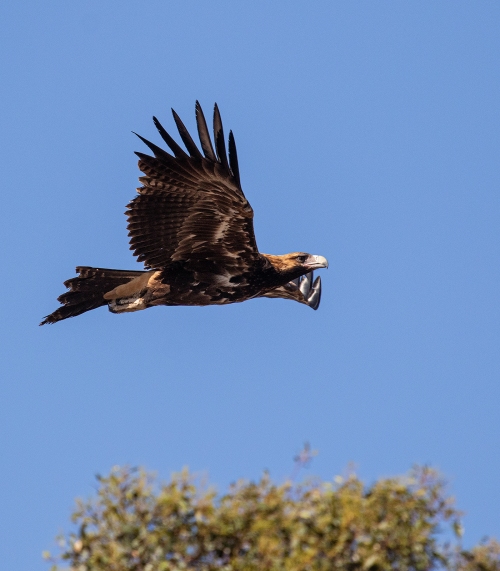 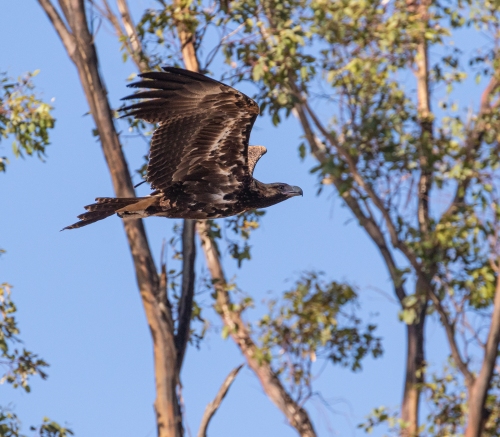 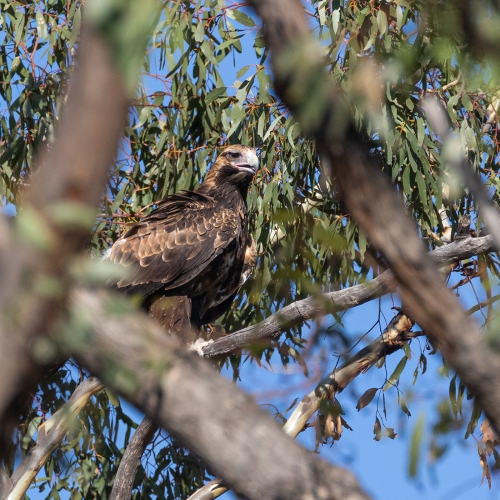 Dusk with a heron

Visits to a series small bush dams often form part of my regular visits to the Mia Mia.

It is common for me to see either a White-faced Heron or White-necked Heron on my arrival at these spots, in some cases both species are present. Typically they will depart for a quieter option nearby.

Yesterday afternoon, on South German Track, as I set myself up in search of bush birds I noticed a motionless White-necked Heron observing me from the far side of the dam. It must have been feeding amongst the rushes when I arrived and I suspect the dining was so good that it was prepared to tolerate my presence. After ten minutes or so it resumed hunting, snaring a yabbie at a strike rate of better than 50%.

Then a Wedge-tailed Eagle appeared overhead, perhaps 100 metres up. The heron had been occasionally casting its eyes skyward and it was obvious why. The arrival of the raptor made the heron extremely nervous, to the point that it flew a couple of tight circles over me and then landed close-by to perch in a dead tree overhanging the water. By this stage it had become quite accustomed to me and happily preened for a time before descending again to chase yabbies. 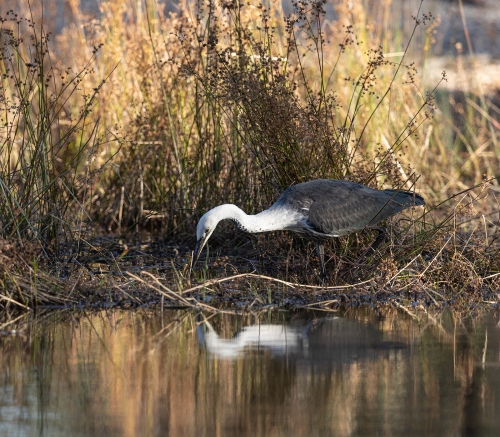 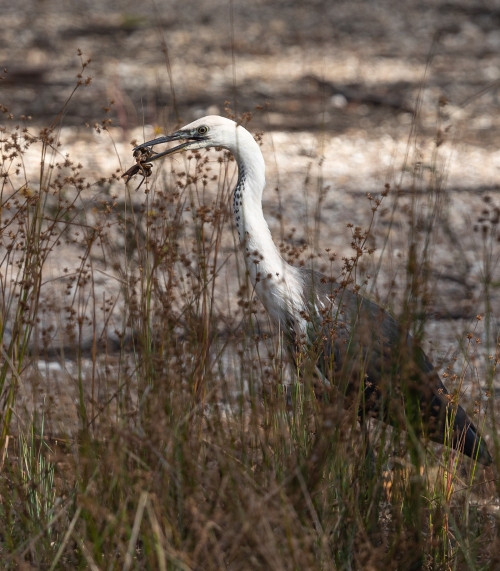 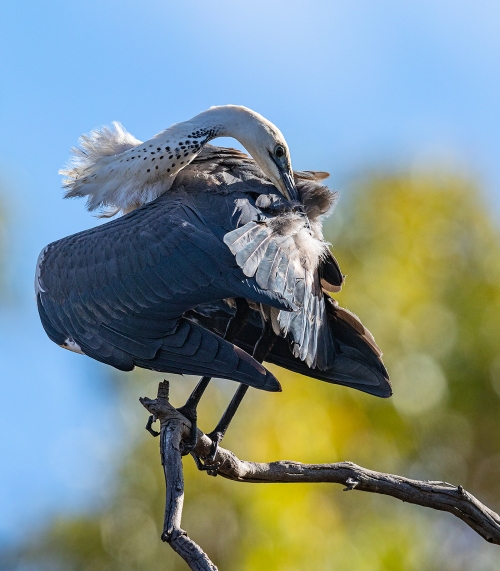 The home garden never fails to surprise with its rich variety of birds.

Living, as we do, in a small village surrounded by bushland to our north and east with farmland to our west and a river in between is part of the ‘secret’.

The Common Bronzewing is resident, as are the Eastern Rosellas – the Silvereye is most likely passing through, while Australian Hobbies roam far and wide across the district as they prey on small birds. It’s pleasing to see the product of a successful local breeding event paying a fleeting visit. 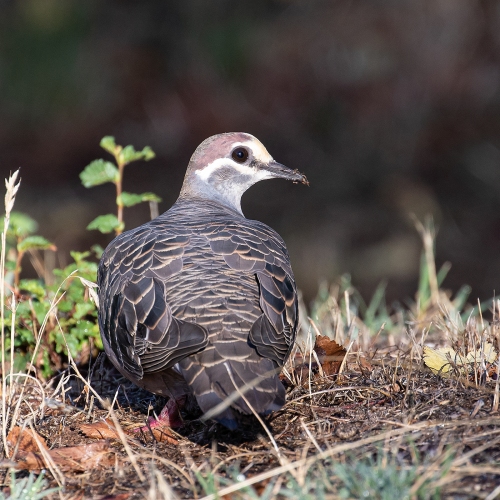 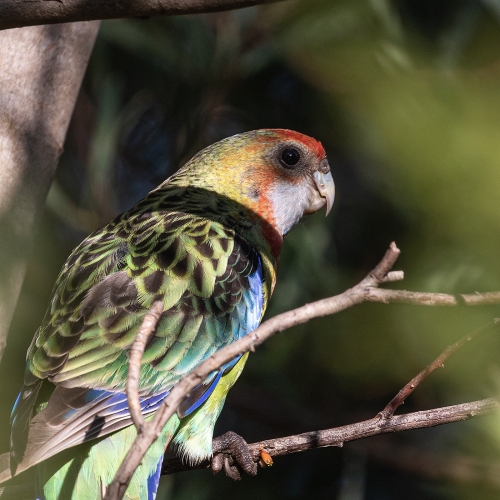 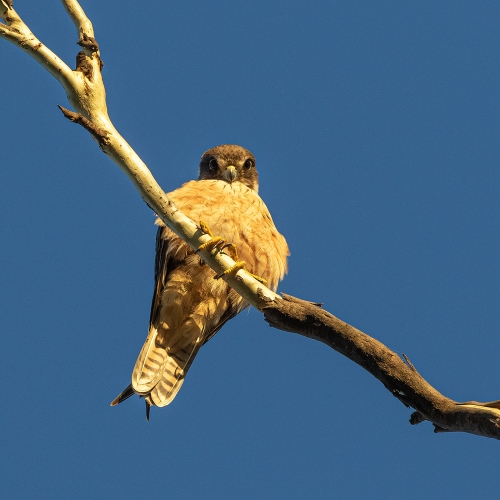 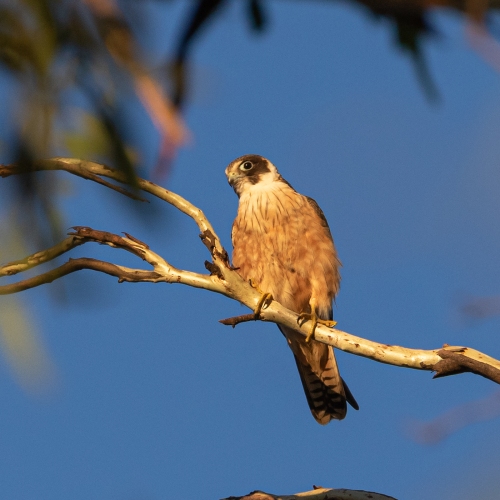 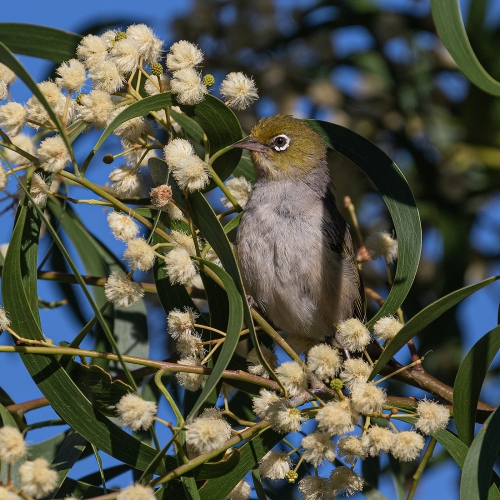 An eagle, then … oh deer

One of the highlights of the weekend was magnificent views of a soaring Little Eagle over the Mia Mia.

Deeper in the forest I managed a fleeting glimpse of a Fallow Deer. I’ve been seeing deer on a regular basis in recent months and while they are fascinating animals I sincerely hope sightings in our local bush become less, rather than more frequent. 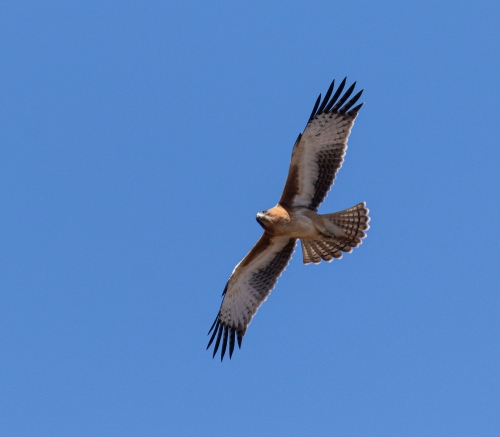 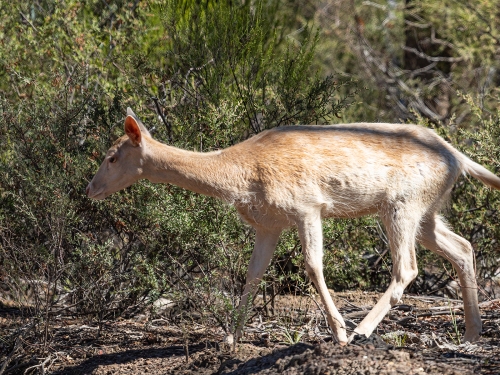 The Brown Falcon can at times baffle even the experienced birdwatcher.

They come in a variety of colour forms, from rich chocolate brown to almost white. Across the continent dark form individuals are more common in the tropics, while in arid regions the predominant form is washed with rufous. Apparently all individuals tend to get paler with age and the bare parts (legs, cere and orbital skin) becomes yellow over time.

Two individuals are pictured here. The first, a dark form, is possibly a young bird, going by the rufous wash around the head and blue cere and orbital skin. In the first image you can see it’s clasping a bundle of grass, the result of a ‘prey-pounce’, moments earlier.

The second individual is a light form, possibly an older female. 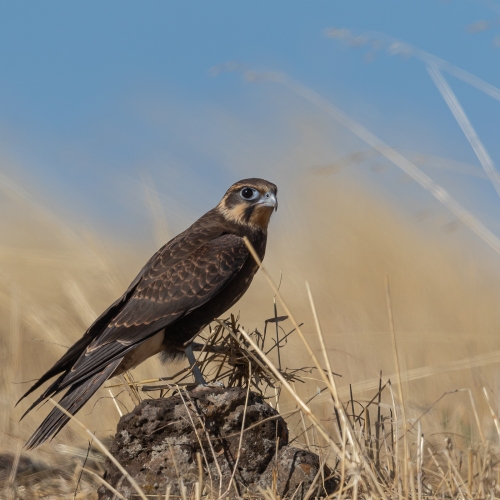