Signs of the times

We’re heading towards autumn with the recent rain and cooler nights a sign of pleasant days to come.

I’ve spotted a few Grey Currawongs recently in the Muckleford bush and last evening came across a youngster, calling expectantly to an accompanying parent. The yellow gape of the juvenile is evident in the images below, while the adult looks a little ragged – the result of post-breeding moult.

Spreading Wattle Acacia genistifolia is now flowering, adding a welcome touch of colour to the dry bush. This species usually starts flowering in January and will continue through till late autumn.

A babbler in a buloke

Buloke Allocasuarina luehmannii is recognised as a tree of the plains country to our west. There are, however, a few individuals scattered throughout the Muckleford bush. Perhaps they were once more common – they are slow growers, germinate patchily from seed and the seedlings are readily browsed by macropods and now of course, rabbits!

The sequence captured below would have once been a common sight in our district – a White-browed Babbler in a Buloke.

Sadly, times have changed. White-browed Babblers and their larger relative, the Grey-crowned Babbler, have disappeared entirely from the Moolort Plains. The former are still relatively common in the Muckleford bush and areas south of Newstead, but the coincidence of a babbler in one of its favourite habitat trees is now a rare occurrence.

May times change again for the better …

Monday this week was an unpleasant day, a pall of smoke from the fires in eastern Victoria descending on Newstead (and central Victoria) – thankfully for only 24 hours. Our thoughts are with the communities and landscapes that are suffering through this time of unprecedented fires.

I was tempted to forgo the daily ritual of a walk with the camera at day’s end, but headed to river – in hope rather than anticipation. I was delighted to be able to sit and watch families of Australian Reed-warblers amongst the bulrushes. There were numerous juveniles sitting on the bulrush stems waiting for the adults to return from foraging excursions with insects for the begging youngsters. It was a cheery end to a eerie day.

Adult (at left) on a feeding run to the begging juvenile

Ecologicaly speaking, it’s known as Floodplain Riparian Woodland, that narrow remnant that hugs the banks of the Muckleford Creek and Loddon River in this part of the world. Further downstream where the topography is more subdued this vegetation community may extend for hundreds of metres either side of the stream, marking the extent of inundation that occurs during a major flood.

Dominated by River Red-gum with the occasional Yellow Box, the best remaining examples are an open park-like woodland with majestic trees sheltering a grassy understory and scattered shrubs such as Tree Violet and Silver Wattle. It is a haven for birds, especially in times of drought. Yesterday I visited a notable local site, near the confluence of the Muckleford Creek and the Loddon River. I enjoyed the company of no less than six Eastern Yellow Robins, and of course, Sacred Kingfishers – visiting a nest site in a large river gum. This summer there is a mass flowering of River Red-gum in the district – the most significant I can recall in the past decade.

Fruits of the season

For me, one of the markers of the festive season is the appearance of the fruits* of the Cherry Ballart Exocarpos cupressiformis. This remarkable plant, common in the bush around Newstead, is a hemi-parasite (partially dependent) on the roots of other plants, especially eucalypts. In a ‘good’ season individual plants can be laden with berries at this time of year. Searching yesterday I was lucky to find more than 5 or 6 on each plant. The hard seed is attached on the end of the fruit.

There is a nice article here in the Conversation by Gregg Muller, noting that this plant can be something of a biodiversity hotspot, attracting a variety of different birds, mammals and insects. As I inspected a clump yesterday along Monash Street a Swamp Wallaby joined me briefly under the shade of the canopy before lazily hopping off in search of an alternative resting place.

As they ripen the fruits transform from green …

… then crimson when fully ripe

The foliage is distinctive and striking

* The fleshy ‘fruit’ is actually a swollen stem.

Posted on December 24, 2019 by Patrick Kavanagh | Leave a comment

The Sweet Bursaria (Bursaria spinosa) plants in our bush just seem to keep on flowering and are an ongoing source of delight for invertebrates and macrophotographer alike.

There are a few species of small sweat bees visiting the flowers, but many are too fast to get a photo of. One (Lassioglossum I think) was a little more cooperative. 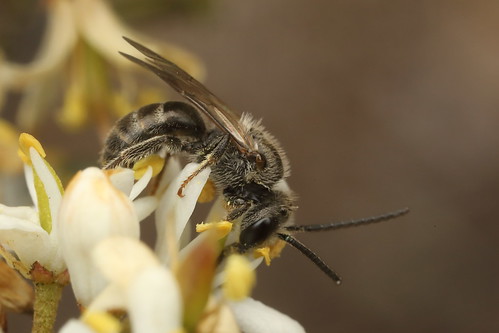 Flies are also great fans of the flowers. At least 2 different species of Bee Fly (genus Geron) have been in attendance. The first photo is of a species about half the size of that in the second image. 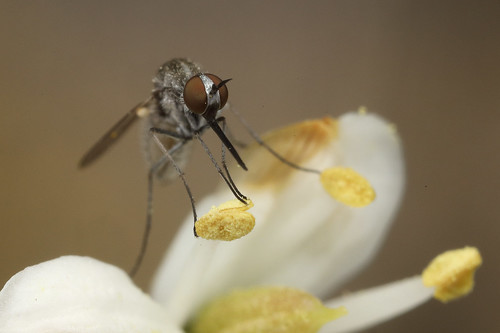 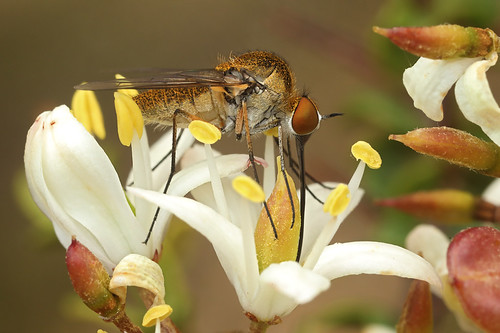 The Bee Flies are small, the larger of those two about the size of your usual mosquito friend. Larger brown flies – a smidge bigger than a house fly – are also common on the Bursaria. 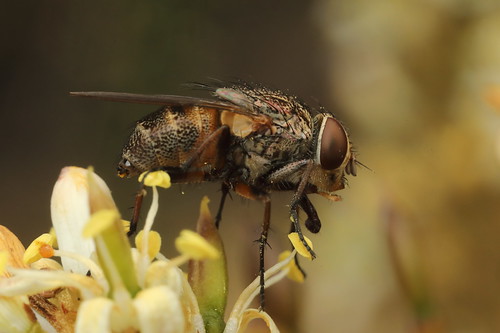 And where there are insects seeking pollen, there are hunters. Like this very swollen Crab Spider with her catch. 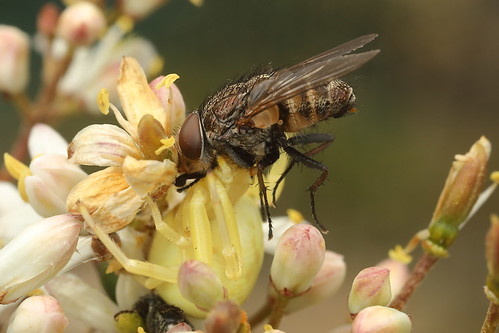 Crab Spider with her fly

Another hunter that I found was a tiny Praying Mantis nymph, about 20 mm long. 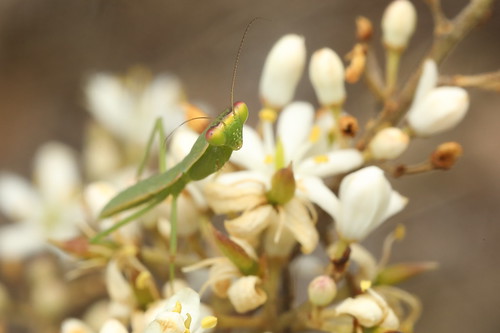 There are also quite a few White-spotted Pintail Beetles (Hoshihananomia leucosticta) at present. A common name for a species could not be more apt! 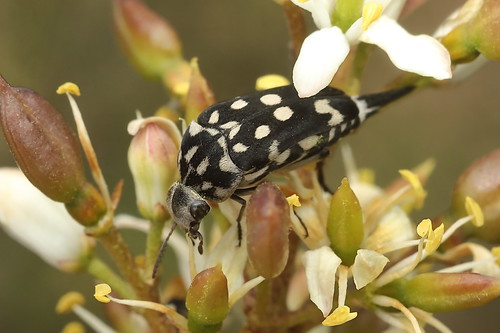 I am struck by the degree of articulation between the head and the thorax of these beetles. So many beetles seem to have a head almost immovable with respect to their bodies. 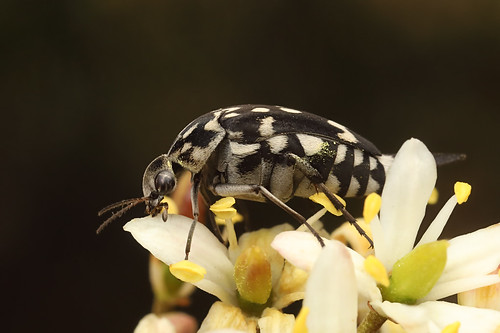 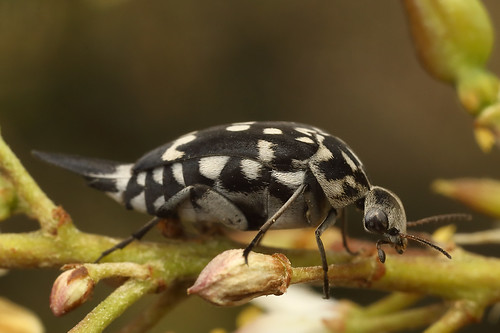 Nine summers ago I wrote a post here about the tiny ants that collected Eutaxia seed at my place.

Once again today I find a collection of seeds on my step – this time of Acacia ausfeldii, a threatened species from Bendigo planted in my garden. It is a larger seed than that of Eutaxia microphylla, roughly the same size as the entrance hole to the ants nest. So it is amusing to watch a patient and persistent tiny ant manoeuvring the seed much more massive than itself little by little until until the seed finally fits down the hole. As with the pea seed the ants remove the tasty white aril and eject the ‘naked’ black seed back up out of the hole.

In the photo you can see on the yellow card the whole seeds as they are straight from the Acacia ausfeldii shrub in my garden, with the white aril attached on the right hand side of each seed. Compare them to the ‘naked’ seed around the ant hill entrance (close to bottom of photo, on bottom end of largest quartz pebble in step).

No mucking around with shelling seeds from pods for me in this case – all I have to do is sweep my step! How clever is the shrub to put a tasty treat for ants (and perhaps birds) on the seed to help it get dispersed? The aril  is not needed for germination at all, but is an important source of protein for the ant colony.