I was keen to pay another visit to the tiny Buloke remnant, in search again for Singing Honeyeaters. Sure enough the birds were still there, at least five individuals active in the canopy. From there I travelled further west to another favourite remnant, along Plumptons Lane at the edge of the plains country.

A Singing Honeyeater was heard, but my attention was drawn instead to a small party of Yellow Thornbills, a species very much at home in Buloke. Nearby, Harlequin Mistletoe Lysiana exocarpi, could be seen on a number of the mature Buloke trees. This striking mistletoe is widespread throughout Australia, from southern Victoria to the tropics and across the arid centre, and is known to parasitise a wide range of shrubs and trees. It will even become an epiparasite on other mistletoes including the local Box Mistletoe Amyema miquelii. 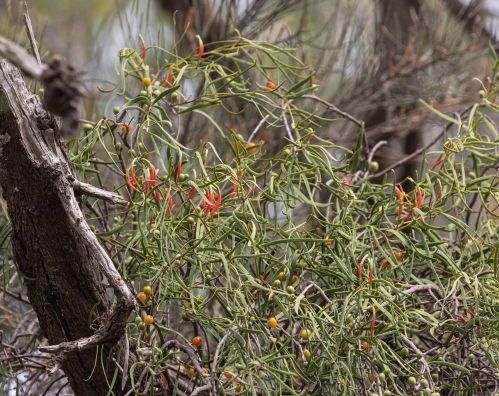 The parasite and its host