A wonderful aspect of birding is the unpredictable nature of it all.

I often start a ramble with a reasonable idea of which species I might see, as well as a small list of birds that I hope to encounter. Every trip is different.

Last weekend in the Mia Mia I was on the lookout for cuckoos, especially Pallid Cuckoos, spotted earlier in the week along Bruce’s Track – my first sightings for the season.

While there was no sign of Pallids, other cuckoos were calling – Fan-tailed, Shining Bronze and Horsfield’s Bronze. This Fan-tailed Cuckoo was observed moving surreptitiously through the understory … perhaps in search of caterpillars but possibly also looking for an opportunity to deposit an egg in the nest of a host … such as a Chestnut-rumped Heathwren. As I approached the cuckoo two heathwrens scuttled from a patch of nearby Gold-dust Wattle. Their subsequent behaviour, perching to view the intruders and some gentle contact calling suggest we were both on their breeding ground.

Click here for a terrific local story about the association between these two species. Heathwrens are difficult birds to find and photograph, so to capture one feeding a cuckoo is a great feat. 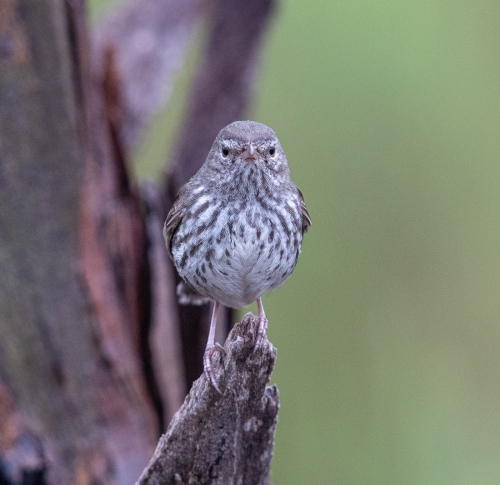 This entry was posted in Bird breeding, Bird observations, Migrants, Spring Hill and the Mia Mia. Bookmark the permalink.