The theme for the next month is going to be … ‘What is happening to our woodland birds … blip or collapse?’

I’ve already alluded, in recent posts, to a worrying summer decline in both species richness and abundance of our local woodland birds.

During the week I paid visits to Rotunda Park and Mia Mia Track and on both occasions observations followed recent trends – very few birds and a lack of variety. No sign of robins (apart from a single Eastern Yellow Robin in the Mia Mia) or whistlers and very few honeyeaters. Let’s see what happens over the next month … I’d be very interested in other local notes to add to the mix. 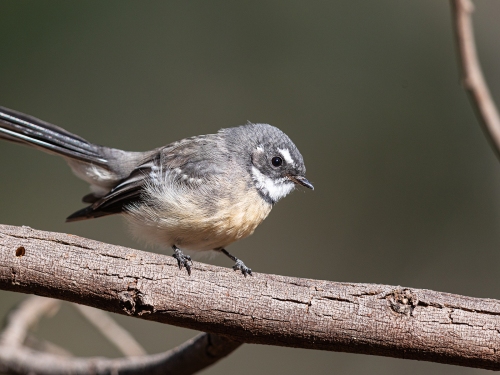 Brown Thornbill in the Mia Mia

Postscript: Damian Kelly, another active local birder, sent me the following note after reading this post …

I read your resent blog posts about species numbers with interest. Being out and about quite a bit I have to agree with your comments. Apart from a few Yellow Robins and a couple of Jacky Winters locally I have not seen any other small insectivores so far this year. Quite disturbing.

Not only in the Newstead orbit but further afield – for example Mount Lofty (near Redesdale) is usually a good spot for Scarlet, Hooded and Yellow Robins. A recent visit yielded none of these, although I did see a couple of Jacky Winters. No Speckled Warbler which I have seen in the past.

Same for a couple of Coliban water race tracks at Elphinstone and Mt Alexander – Scarlet and Yellow Robins usually present, but not seen in recent visits this year. Even the wetter Blackwood area was way down on species – no robins part from a solitary yellow. Rufous Fantails and Bassian Thrush were very rare compared to previous years in January. Grey Fantail was common.

The bush surrounding parts of Tullaroop seems to be faring better with Varied Sittella, various honeyeaters, Weebills, Shrike-tits and such like in reasonable numbers, but no robins. Plus one WB Sea-Eagle the other day. Also lots of Tree and Fairy Martins.

Lynne, as you know, studies spiders quite a bit and she is reporting significant declines in numbers of both the ground dwelling wolf spiders (like the one in Frances’ recent post on your blog) and the arboreal orb weavers as well as the black house types that she encourages on the windows of our house. She reckons that insect numbers (as evidenced by fewer insects caught in webs) are significantly lower which results in lack of food and subsequent breeding.

I did a lot of surveys – 20 minute 2 hectare – for Connecting Country in spring/early summer last year and patterns were similar. This covered 17 surveys at 9 different locations and the pattern was similar. Of course less insects limits bird food as well. A link with the robins? Who knows…..

This entry was posted in Bird observations, Rotunda Park, Spring Hill and the Mia Mia. Bookmark the permalink.