I thought it fitting to mention Mistletoe at Xmas … especially having the good fortune yesterday to capture a rarely seen part of an ecological puzzle. With my lens focused on a female Mistletoebird Dicaeum hirundinaceum it thoughtfully perched sideways on a stick and proceeded to deposit a recently consumed seed!

Mistletoebirds feed almost exclusively on the fruits of this fascinating group of plants and are crucial to their dispersal and life-cycle. The seed is covered with a sticky, mucilaginous coating that readily adheres to the surface of twigs and branches, where they germinate. The coating survives the journey through the bird’s gut intact. There is obviously a strong interdependence between the Mistletoebird and the various species of mistletoe and the bird has successfully propagated the plant throughout its habitat, ensuring an abundant and reliable food supply.

Mistletoe is a parasite, with the attached plant tapping into water and nutrients of its host, eventually killing the plant beyond the point of attachment. In some cases plants can become infested with mistletoe to the extent that they die, although this is unusual in healthy habitat. Isolated paddock trees are most at risk – with few choices the Mistletoebird can deposit many seeds on a single tree, leading to a sometimes unbearable parasite load. In our district there are a number of species of Mistletoe that can be found on eucalypts and wattles. The species photographed below is Box Mistletoe Amyema miquelii. 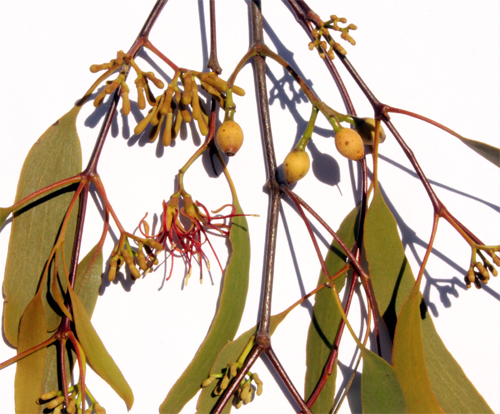 To complete the story nicely a male Mistletoebird flew in and perched briefly enough for me to admire its spectacular red and glossy blue-black plumage. 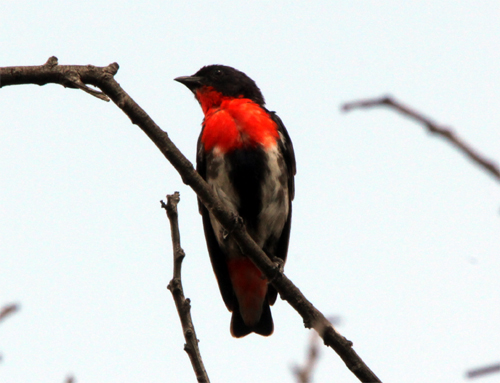 Footnote: The efforts of the female were in vain … it chose to leave its seed on the already dead branch of a Cootamundra Wattle!

This entry was posted in Bird observations, Flora. Bookmark the permalink.

One response to “A Xmas Mistletoe story”